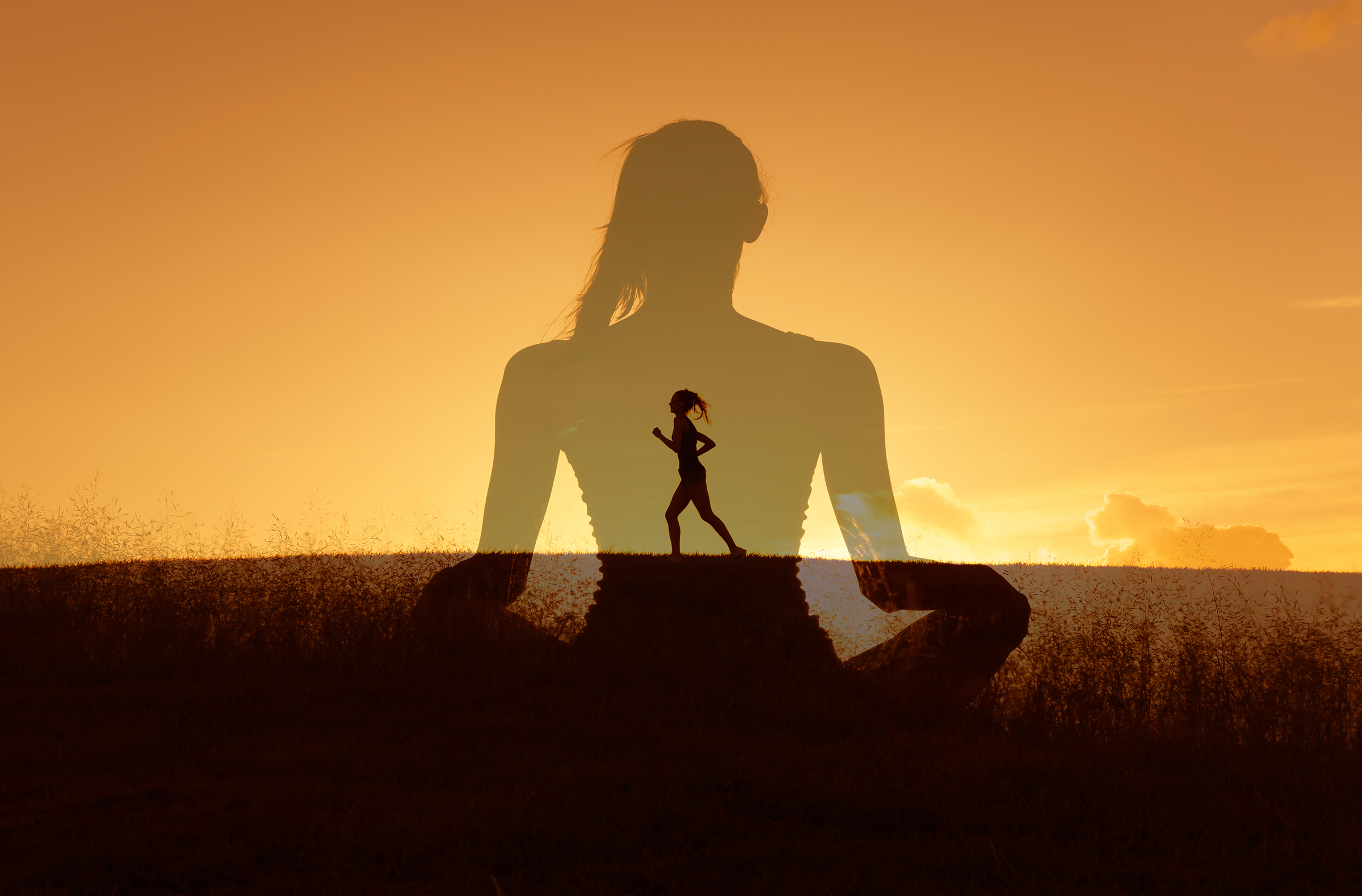 Why are runners reluctant to try yoga when they have a lot to gain? Their most common anxiety attending a class is that they are not flexible enough and therefore will never be able to do it. This preconception may be reinforced by the many images one sees of lithe yogis performing what appear to be impossible yoga poses (asanas). This is not a true reflection of yoga. Yoga is suitable for all body sizes, ages and genders. Newcomers who are the stiffest have the most to gain. You start at whatever level you are at and work at improving your strength and flexibility. However small, it's all an improvement. Runners often try yoga to deal with specific issues, yet many are surprised at how strong the body begins to feel and how aware they become of muscles they never knew they had.

The physical side of yoga works to balance, strengthen, stretch and tone the body symmetrically. Through emphasis on correct joint alignment, stresses through the joints are reduced. This allows the body to move with greater ease and less effort.

Running is a repetitive sport; the same groups of muscles are used again and again. When muscles are contracted repeatedly their fibres shorten and, over time, remain in the shortened state. As muscles shorten, they create imbalances in the musculoskeletal system and reduce the range of motion in related joints. Many runners' injuries are a direct result of some form of musculoskeletal imbalance related to repetitive movement. For example, tight outer quadriceps and weak inner quadriceps create an imbalance in the knee joint, which can lead to knee pain and runner's knee.

Yoga complements running well, as it restores symmetry and balance to the body. It not only improves the physical body, but tremendous benefits can be gained from all other aspects of yoga particularly breathing, focus and meditation.

Runners mainly use the muscles from the hips down, which become strong, but they tend to become weak in other areas of their body. A running stride involves only the lower body and movement in one plane, forward and backward. Certain muscles become strong while others are underused and remain weak. Working with different yoga asanas recruits more muscles in the upper and lower body and in a variety of planes (Coronal plane—sideways up and down; Sagittal plane–forward and back; Transverse plane—rotation towards and away from the body).

When a runner is new to yoga and is faced with holding a standing yoga pose, they are surprised their legs feel like jelly (jelly–leg syndrome). Yoga highlights tight and weak muscles. The weak muscles fatigue quickly, and those that are tight want to be released. For muscles to be fully functional and build strength, they need to contract and shorten, relax and lengthen and be able to move through a healthy range of motion. Runners can learn to recruit other muscles in their body, especially the core and deeper muscles, which will help to stabilise the body and improve their technique. Their arms and legs can move more freely and efficiently, they will feel less fatigue, their legs will feel lighter and risk of injury will be reduced.

Yoga helps to lengthen tight muscles allowing a greater range of motion in related joints. By building up heat (tapas) in the body through specific asanas, the soft tissue especially the muscles fibres and fascia can be stretched more effectively. For example, when the area around the hips are stretched movement, becomes easier and more fluid for runners. It enables the runner to lengthen their stride, improve their posture and reduce the number of lower extremity injuries.

Muscles work in opposing groups of antagonist and agonist. When one group (antagonist) lengthens, the other group (agonist) contracts. An example of this is that when lengthening the hamstrings, the quadriceps contract. This coordinated action creates a deeper and safer hamstring stretch, but also provides an opportunity to strengthen the quadriceps through their entire range, especially the inner quadriceps. This is crucial for runners because the hamstrings often need lengthening, while the commonly weak inner quads need strengthening (for the last few degrees of knee extension). Yoga uses this principle when trying to lengthen muscles, you get the added benefit of a deeper stretch at the same time as strengthening the opposing muscles especially at the end of its range. This is a major benefit to runners who undertake a regular yoga practice.

For runners, biomechanical imbalances are common in the lower limbs as these are the muscles that are mostly repetitively used. Overusing some muscles in the body while underusing others, leads to muscular imbalances affecting the entire musculoskeletal system.

On an individual level if you repetitively contract a muscle it will begin to shorten and ignite fewer of its muscle fibres causing weakness within the muscle. This impairs the biomechanical efficiency of that muscle. The shortened muscle also decreases the range of motion of the joint that it moves over.

Yoga helps to restore biomechanical imbalances. Every pose is a balance of stability: muscles contracting (strengthening) and muscles stretching (lengthening) and several muscle groups are engaged. Even in the simplest yoga asanas, muscles are ignited to awakening every part of the body. Improved biomechanical balance helps runners improve their technique and, hopefully, lead to fewer injuries.

Yoga provides a holistic workout for the body externally and internally. It uses small muscles in the hands and toes, the large muscles of the legs and torso, the superficial muscles such as the calves and hamstrings, and the deeply layered muscles that are not visible. Furthermore, many of the body's systems are worked in yoga, including the cardiovascular, respiratory, skeletal and endocrine systems–the internal organs are massaged and oxygenated through yogic breathing and movement in the asanas.

For example, in downward dog, the superficial muscles of the back are stretched along with the intrinsic layer of paraspinal muscles, creating space and length in the spine. The upper and lower limbs are also stretched helping to the joints that they cross to increase their mobility. The arms, back and legs are also strengthened aiding stability within the body. The inversion (head lower than the heart) along with the yogic breath affect the body's systemic systems (cardiovascular, respiratory, skeletal and endocrine systems).

It helps the body actively recover from the demands of running

Rather than deplete the body of its energy stores, a yoga practice oxygenates the blood and creates more energy, leaving the body and mind feeling restored and energised. Yoga can help the body actively recover from the physical demands of running.

Each time we breath, fresh oxygen is inhaled which feeds our cells and as we exhale, we remove the carbon dioxide, eliminating toxins. The more efficient this is, the greater the benefit to runners' physical performance. Lung capacity is of prime importance for runners. The better the lung capacity, the more oxygen is circulated through the system, which helps runners run for longer and stronger. The breathing pattern often used in running involves quick and shallow inhalations and exhalations in the apex of the lungs. The middle and lower portions of the lungs tend not to be used, resulting in the pooling of carbon dioxide in the bases. This reduces the lung capacity, that is, the amount of oxygen that can be inhaled. Yogic breathing (Ujjayi) involves slow, rhythmical deep breathing to all parts of the lungs. It has shown to increase lung capacity by encouraging full exhalation creating space for the next inhalation. Greater lung capacity increases endurance and improves overall athletic performance.

Try this dynamic stretch as a warm-up exercise